An unbelievable story…
Hidden behind a wall for 40 years, then in a garage for another 20!
Walled up in 1957, rediscovered in 2017 and presented to the public and the media on the 26th of October, 2021.
A spatial sculpture that measures 300 cm x 225 cm, much better than a modern painting.
Previously stored in the Lucio Fontana Foundation ( rif. 4237/1) and now welcoming all fans in our Gallery in the heart of Milan, in via Euripide 7.
Reviewed by Enrico Crispolti in 2018 as ‘Sculpture in Spatial Mosaic’.
Presented by Vittorio Sgarbi in 2021.
An artwork whose future will be in a major international Museum,
or in the hands of a lucky private collector.

We have been extremely lucky to come across a unique work of art created by a great artist with the added value of a remarkable story. It’s the dream of every art lover! Many wait all their lives for such an opportunity unsuccessfully. In November 2017 we received a call. A friend, owner of an antique store himself, informed us about the discovery of an artwork of Lucio Fontana that had remained hidden behind a wall for 40 years! Given the importance of the artist, we immediately made an appointment to see it. The meeting was held in Varedo, at the historic headquarters of the Vantellini Company, who had been one of the leading custom-made furniture producers throughout the 20th century. Varedo is also the birthplace of the twins Osvaldo and Fulgenzio Borsani, internationally well-known for their furnishings created with important collaborations, such as the ones with Lucio Fontana. Once arrived in Varedo, we were introduced to Mr Gianni Vantellini, who let us in and told us an exciting story. His father, Luigi Vantellini, born in 1911 like the Borsani twins, was not only one of the biggest manufacturers of custom-made furniture, but was also an avid collector of modern and contemporary works of art. As a child, he was a student at the Tradate boarding school, together with the Borsani twins. Over time he maintained personal and working relationships first with ABV and, subsequently, with Tecno. There was a time when every weekend they went to Albisola, where they met Emilio Scanavino, Agenore Fabbri, Adriano Spilimbergo and Lucio Fontana just to mention a few. In this contest, in 1957, Luigi Vantellini had the opportunity to buy a few works by the master Lucio Fontana, among which some wall ceramics and the sculpture “the Warrior” (white), dated 1949, 118 cm tall.

In the last days of his life, Luigi called Gianni, his son, at the bedside and unexpectedly confided a secret to him. He said:” Gianni, when I’m gone knock down the wall behind the painting booth at the factory, you’ll find something that you may find useful”. A few months after his death, Gianni, according to his father’s will, called a mason and asked him to break down the wall.
A first small hole revealed the presence of an interspace. They couldn’t see anything inside, so they widened the hole until they were able to sneak in with a torch. To Gianni’s incredulous eyes appeared a huge wall sculpture, made of mosaic, in a wooden crate: a note attached with a thumbtack said: walled up in 1957. Thanks to his artistic culture, handed down by his father, he knew that it could be a work by Fontana. Since he didn’t have enough space in his house to place it, he moved the artwork from the factory to the garage of the house, in the same courtyard. As the mosaic was a memory of his father, Gianni decided to keep it in there and didn’t show it to anyone for over twenty years.

In 2017, he realized that neither he nor his children would make use of this masterpiece and, consequently, he decided to sell it. Thanks to this decision and destiny, in November of the same year, we found ourselves in front of something rare and extraordinary. A work that dazzled us like a headlight. We had no doubt that the artwork was done by Fontana: we couldn’t leave without buying it, at all costs!
It took us all morning and a lunch characterised by a typical “cassoeula” dish to find a satisfactory agreement for both parties.

Fascinated by this work, we immediately started researching to better understand its history. A partial image of a mosaic, attributed to Fontana and published in the Corriere, seemed to have very strong analogies. While investigating, we found that it was an artwork located in the province of Brescia, precisely in the small town of Breno, at Villa Tassara. The Tassaras were big manufacturers in the steel industry and the town of Breno developed around their huge factory. In 1954 the family mansion was renovated and the entire project was entrusted to the architect Osvaldo Borsani, who availed himself for the interiors of the collaboration of Agenore Fabbri, Adriano Spilimbergo and, above all, Lucio Fontana. The famous mosaic Medusa, which is now at the Prada Foundation, was specifically designed for this mansion. Its type of mosaic tiles coincides perfectly with those of the newly discovered work. We contacted the current owner of Villa Tassara, Mr Murachelli, the town pharmacist. Despite the initial distrust he showed towards us, thanks to the shared passion for art, he allowed us to visit the house. Murachelli has maintained and preserved a rare examplar of the 50s design: it was like being brought 70 years back in time. The bathrooms are still intact, with their original sanitary fittings and extraordinary accessories; the tiles are fire-painted by Spilimbergo. A huge painted glass window, signed “ABV AdrianoSpilimbergo”, divides the dining-room into two. The red formica Kitchen by Borsani is a real masterpiece: the doors, while opening, light up original 50s neon lamps. The round rosewood table by Borsani is characterised by electric controls under the top for the specific dishes; the controls light up a panel in the kitchen. At the entrance there is a niche covered with white pebbles where the Medusa had been placed. The marks of the brackets that supported it are still visible to this very day.

Going up the stairs, you find yourself in front of a fascinating sight: a 580 cm wall along the stairs that is covered with mosaic! The tiles and the style are the same as the ones of our rediscovered artwork.

Huge windows, when opened, allow you to see the studio where we suppose that our artwork was designed to be placed. On the wall you can still see the metal brackets that were installed to support it.

These brackets could only have been a predisposition to a hanging console, which is a typical piece of the Borsani production. Above the line of the hypothetical top, the space is just perfect for our mosaic: 354 x 245cm is the space available, 300 x 225 cm are the measurements of our mosaic!
Obviously, this should have been its final destination. Placed in the studio on the left wall, it would have allowed a contextual vision comprising the mosaic on the staircase, the mosaic on the studio and a wonderfully decorated ceiling painted by no less then Lucio Fontana, all at the same time.

In May 2018, we drove Professor Enrico Crispolti to Breno to personally show him Villa Tessara. Then we headed to Milan, where we analyzed our mosaic work together.

It was a great satisfaction to receive compliments from the Professor. He allowed us to record the precious conversations of that day and accepted our proposal to take care of the presentation of our artwork to the public and the media. Unfortunately, Enrico Crispolti died on December 8th, 2018.
The presentation project vanished, but the recordings, testifying many fundamental aspects related to the artwork, remained. Professor Crispolti left us important suggestions such as the best way to define the mosaic: spatial mosaic wall sculpture.

He pointed out that the big dark mirror in the centre of the work represents a spacial breakthrough, the third dimension, a huge hole! In fact, the original location was planned at 95 cm from the ground and, consequently, the mirror was supposed to be placed at 170 cm from the floor, thus not allowing it to be used as a mirror. Along the large curls there are slight holes on a black background that represent the holes in the spatial concept. Therefore, the first element that Crispolti brought to our attention was that this is a spatial concept mosaic work. Another important element is that this is not a work designed by Fontana and then made by skilled workers, but a work modeled by Fontana’s hands and then covered with tiles in his presence and under his supervision. A long and complex work that justifies a very limited production of artworks of this kind, but makes them extremely unique and valuable. Professor Crispolti considered it highly probable that the initial destination of this work was supposed to be Villa Tassara and also the mosaic of the staircase on one side and the brackets that coincide on the other seem to suggest that this was, indeed, the designated location. We don’t know why, once the work was completed, it was not installed in Breno. What we know is that in that period Carlo Tassara suddenly died. There were succession problems and this could be one of the reasons why our mosaic was never installed at Villa Tassara. In 1954/55 Luigi Vantellini took the opportunity to buy this work, suddenly left without a buyer. Since he was afraid of himself, he decided to hide it, not to be tempted to sell it. An incredible story was born! The work has never been cemented and the brackets on the back are clean. The case in which it was found was certainly its original packing. In July 2018 the mosaic was archived at the Lucio Fontana Foundation (ref.4237/1). Therefore, it is an original artwork by Fontana never “used” before! An unknown work, which was secretly walled up for exactly forty years in a factory and was later hidden in a garage for another twenty without being shown to anyone! A story that represents an added value to a work that is already interesting in itself. The information we got from Professor CRISPOLTI has been and will be a surprise for everyone, as well as an emotional memory for those who met him.

We have been promoting and enhancing this exceptional masterpiece and its incredible story through our non-profit cultural association Euripide7 APS, which raises funds for charity.
The future of this Lucio Fontana is destined for a major international museum or a lucky private collector.
The artwork welcoms all fans in our Art Gallery in Milan, in via Euripide 7. 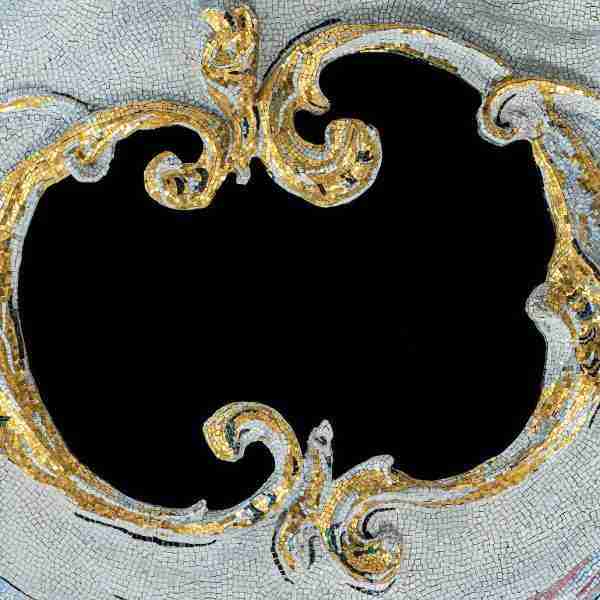 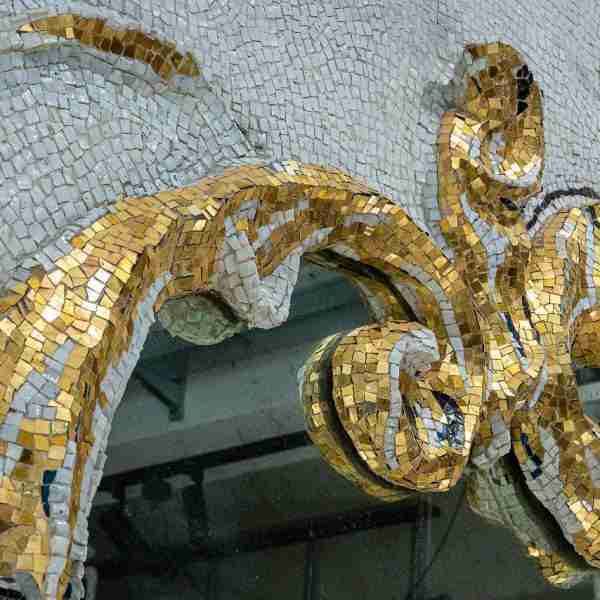 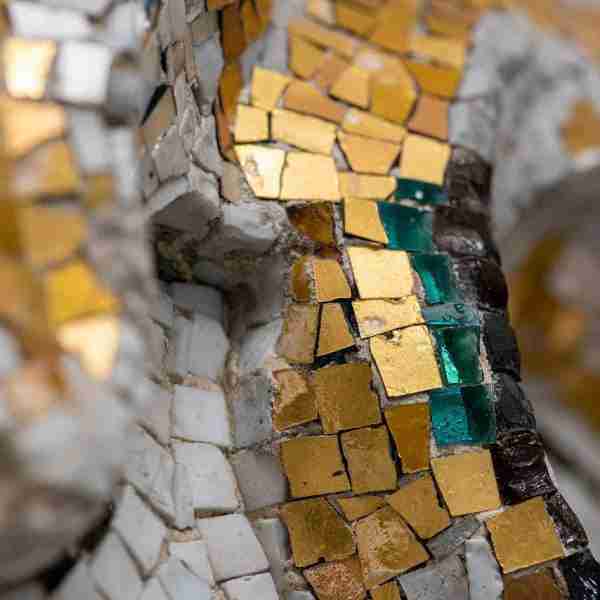 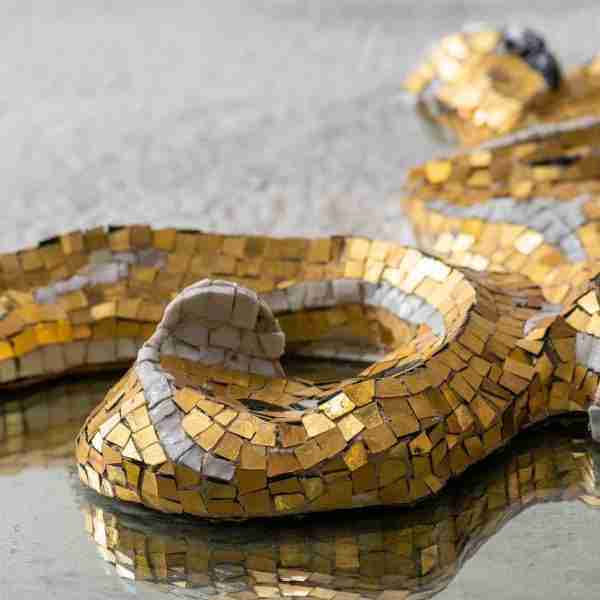 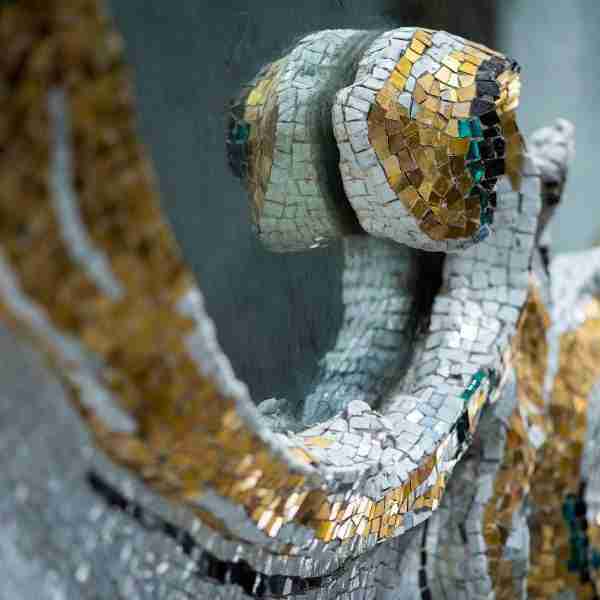 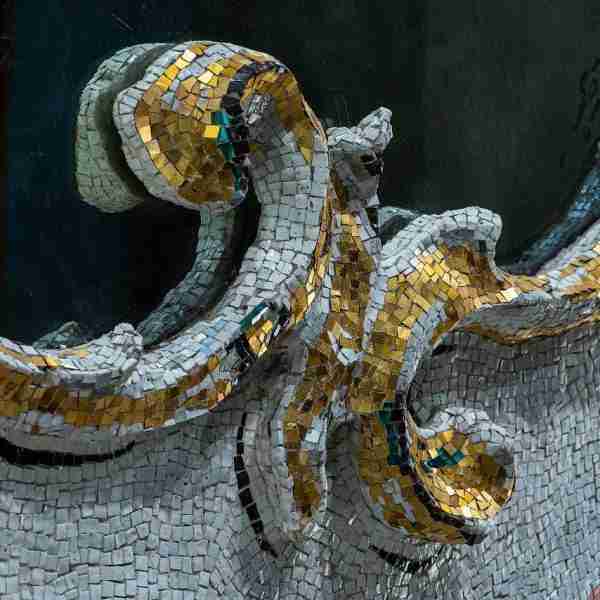 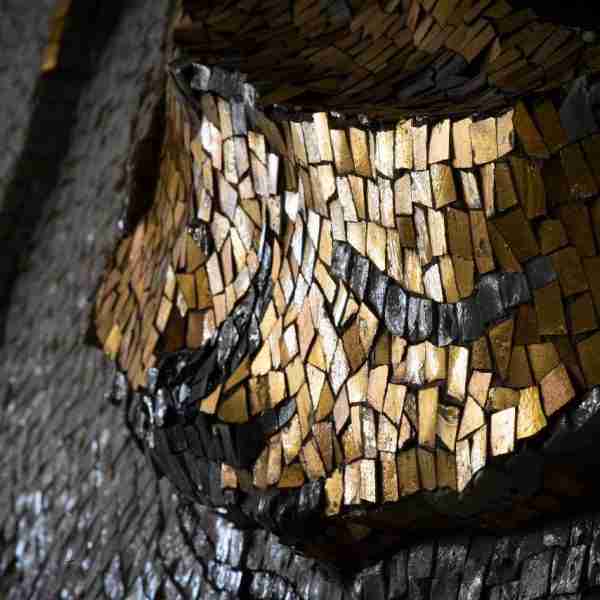 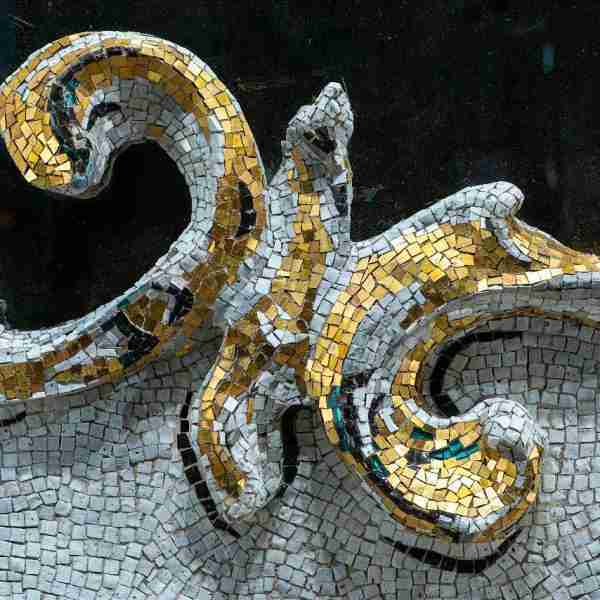